Two years ago I took a workshop called Mission Control that changed my life. When I completed this workshop I left stress behind. The course leader Herma is fabulous.”
Jaime C.CPA MBA

Herma guided us through a three-month Breakthrough Leadership Program which completed issues from the past and formulated us as a powerful team.… After a six-week period, beyond anybody’s expectations, we produced results with our laser technology that had not been possible in the previous 18 months."
D.L. President and CEO
Technology Firm

The results exceeded our expectations. We can highly recommend your methodology to any organization that needs to be impacted immediately."
Paul D.Managing Director, Financial Industry

More effective communication in a shorter time — and that leaves more time for going out and getting the results. I see the possibility of a breakthrough in sales next year.”
Al S.Regional Sales Manager, Pharma

Case Study 1: ‘From Worst to First’

Why the “Contract” program?

Unbeknown to the agency, this relationship was hanging by a thread. Our interviews revealed a climate of distrust, frustration and poisonous gossip.

Client was giving the ad agency its last chance. Agency hoped to wipe the slate clean and start over.

Advertiser and agency discovered that the origins of their problems were conflicts between people no longer with either company. “Ghosts” were running their relationship!

Program shifted attention and energy from a divisive past to a shared future, empowered with new communication and productivity skills.

Results two months after program, as reported by the advertiser: 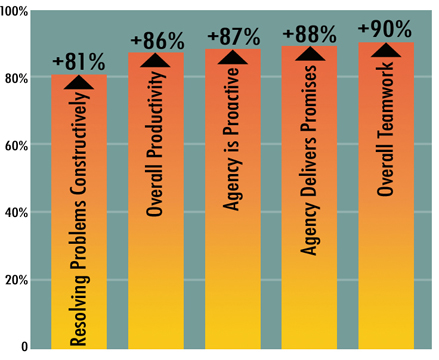 The VP of Marketing wrote us: “Strongest leadership and management experience I’ve had. I got far more out of this than just relationship / communication building. I got excellent management training.”

Sixteen months later he toasted the agency, saying, “This relationship was the worst. Now it is the best I’ve had in 15 years in management.”